As a child, I had a kiddie car. It was made by my father, using scooter wheels. With safety belts and the rear lights from a Volvo Amazon it truly was envied by every other boy in the street. It was constantly improved and upgrades - at one time it even got brakes.

That kiddie car is one of my fondest memories. Today, I've got 3 crazy boys of my own. It's my turn making them a kiddie car.

A few years ago, i happend to see the picture to the right on a website somewhere. It's a Land Rover. A small Land Rover. Some research showed it to be a Toylander. A gentleman in England makes a living from selling blueprints and more or less prefabricated parts for it. I ordered blueprints, and a few weeks later building could start. 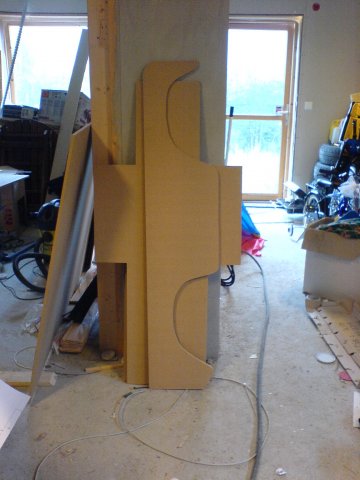 After receiving the plans, building could commence. The suggested way of doing this, is to glue the patterns to the MDF, and cut along the lines. I found this to be a tad brutal to the pattens, and chose to glue them to some carton and cut along the lines. This way, I had a set of relative strong templates I could use to mark where to cut. It is possible to make minor adjustments before cutting, and if I ever need to make spare parts (or another car), The templates will come in handy.

A land Rover Series II is built on a frame, with a body made from aluminum and steel bolted on top of it. A Toylander II is built from moisture resistant MDF or plywood as a unibody. I initially wondered whether to use MDF or plywood. Both materials have approximately the same weight and cost, plywood is probably somewhat stronger. MDF on the other hand is easier to work on, and will give a smooth finish with less work. I chose MDF. 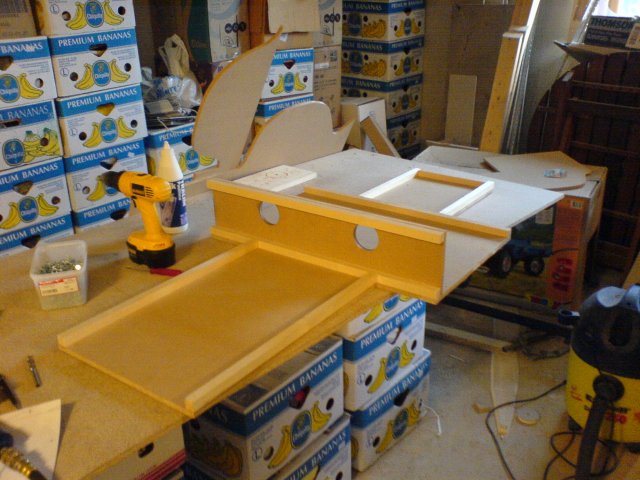 It takes a bit more than one sheet à 120x240cm of MDF or plywood to make one car. (I guess you can make 3 cars from 4 sheets). To cut the parts takes a few evenings. The parts are glued and screwed together using 19x19mm battens. I was surprised to see how well the part fit, and the body tub has a construction that makes it very solid and rigid.

When building the body tub, I mostly followed the directions given. Some minor adjustments was made, like using model plywood, not aluminum, for the curved part of the front panels, and to make the seat back removable to allow grown-ups to drive the car. 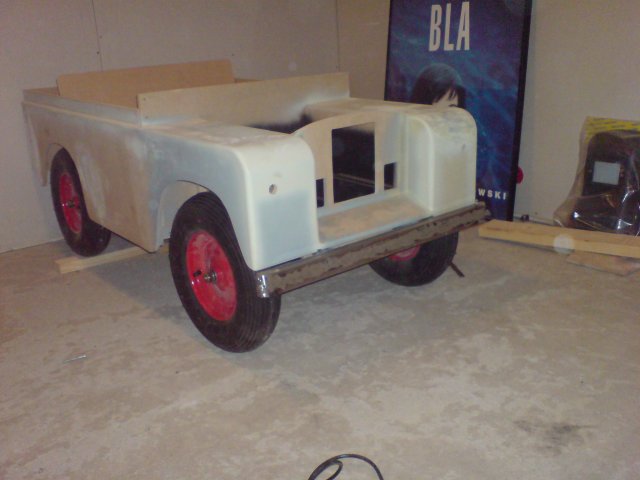 A kiddie car without wheels is no fun. Getting a set of suitable wheels turned out to be a challenge. The wheels needed should have a diameter of approximately 40cm, and 8"x2-2,5" rims. As the car is relatively heavy, they need proper ball or needle bearings. Bushings would wear too fast.

The company/person selling patterns for the Toylander - Real Life Toys - is also supplying all sorts of parts, including wheels. The parts are reasonably priced, and I strongly considered buying from him. However, shipping was an issue. Royal Mail wanted a lot to roll a set of wheels over the North Sea. In fact, it would have taken the entire kiddie car budget. I had to find an alternative.

At work we have a yellow trolley. It's wheels are perfect! No, I did not steal the wheels from the trolley - that would have been just a tad too obvious. However, the trolley had Trallnor written on it. With a little help from Google, I found that they were located just a few fields from work. One day - during lunch - I visited them. After a tour of the factory, we reached the wheel storage room. They had a huge variety of wheels, but none had offroad patterns. I ended up buying a set of heavy duty wheel barrow wheels. They had ball bearings and solid steel rims. Hopefully, Ill get a set of offroad tires at a later stage. 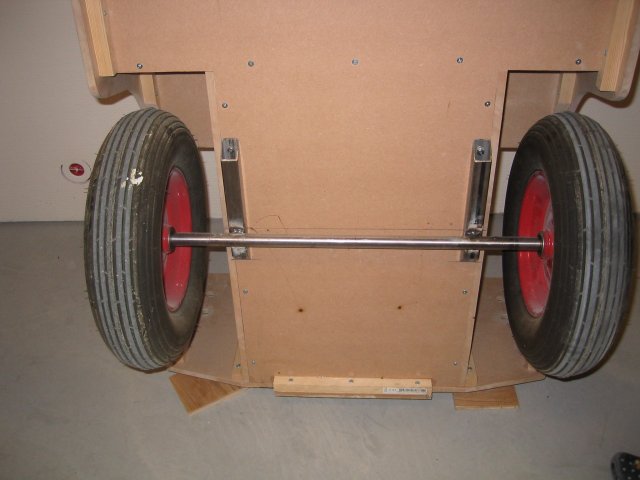 The build manual has plans for the axles and suspension. These are easy to build - rigid rear axle and a front axle like the ones found on trolleys. It also has a suggestion and sketches for a front axle with suspension.

A long time ago, I used to have a genuine interrest in cars and motors. To be honest, I found the setup to be just too simple. I had to improvise. The wheels I had got had bearings for 18mm axles. Instead of using 25mm pipes for axles, I used an 20mm stainless steel axle which I cut down to 18mm for the bearings. At the ends, I made M16 threads. Center nuts are how wheels are secured in Formula 1 - the Toylander can have no less.

At the rear, I increased the track by 50mm and lowered the suspension by 25mm compared to the instructions. A Land Rover has a lot of ground clearance and a narrow track. This is favourable for driving along English sheep trails, but the Toylander is not intended for offroad use. At least not intentionally. My priority is on handling and stability on road. 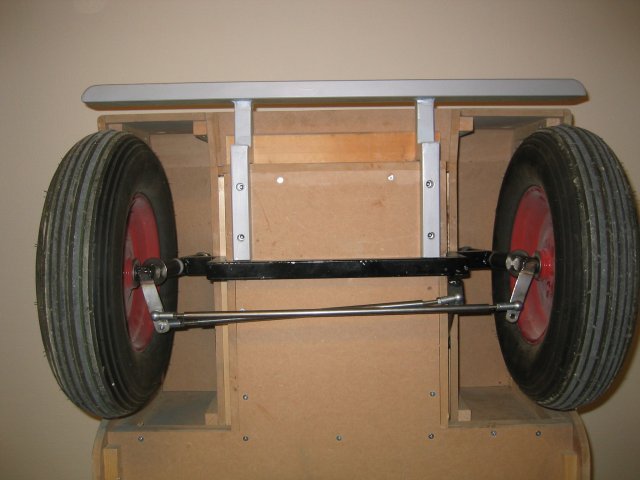 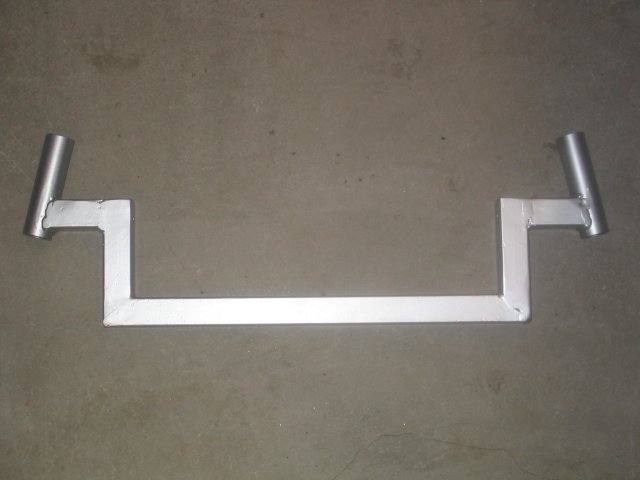 The first adjustment I made to the design, was to incline the sliding pillars to achieve a positive King Pin Inclination. This makes the front wheels turn about a point in the center of the tyre. Additionally, the steering will be self-centering. That's a good thing.

Next thing I changed was the angle of the steering arms. When these are in parallell, both front wheels will turn the same angle when you turn the steering wheel. However, when a car is driving around in a circle, the distance from the center of the circle to each front wheel is different. Thus, the angle each wheel is turned relative to the car, should be different. This is described by the Ackermann's principle.

The front track is increased by 2" and the car lowered 1" like at the back.